Pool was played on Day 2 of the Tripartite Bar Games 2019 at “KK 9 Ball” in Penampang.  Apt, as the format played this year was all 9-ball matches.  In 9-ball, generally, the balls must be potted in sequence from 1 to 9. 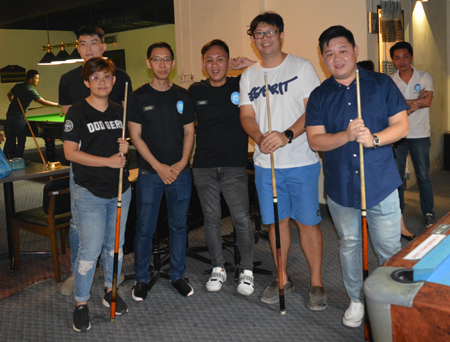 The host, Sabah Law Society (“SLS”), set the format of five matches per tie, race to three (best of five frames) and each team needing at least six different players.  The Malaysian Bar (“MB”) pool team travelled to the Land Beneath the Wind with only three regulars, and had to seek out three others including players from bowling and badminton to join the team.

The schedule of matches saw SLS, MB and the Advocates Association of Sarawak (“AAS”) playing on three tables simultaneously.  The crowd of supporters grew steadily as the night progressed. MB’s Peter-Douglas Ling and Michael Tan won their men’s singles matches against SLS and AAS by scores of 3-0 and 3-1, to give MB a good start.

In the men’s doubles, Peter and Alvin Tan; and Michael and Eugene Teo; were MB’s two pairs.  They applied the old pool adage — “the easiest way to win is to not let the other player shoot” — and played numerous safety shots as they were not in full flow.  A 2-3 loss to AAS aside due to uncharacteristic mistakes, the other three men’s doubles matches ended with MB winning 3-0, 3-1 and 3-1.

In the ladies singles, MB’s Lim Soo Wen and Leong Pei Pei (who usually participate in badminton/cross country only), then stepped in to play the ladies singles matches against SLS and AAS, respectively.  Against clearly more experienced opponents, they played gamely but went down fighting 1–3 and 0–3.

The last matches were the mixed doubles.  Rodzim Zaimy (MB Bowling Convener and veteran badminton player) teamed up with Pei Pei.  Pei Pei proved to be a clutch player, potting almost every 9 ball for the pair.  They beat SLS 3-1 and their next match against AAS went to the wire, with Rodzim (finally) potting the 9 ball to win it 3-2.

Thus, MB overcame SLS and AAS respectively, by scores of 4-1 and 3-2 to win pool overall.

The atmosphere was full of fun with players and supporters mingling with one another.  The MB pool team thanks all players from the three contingents, the organiser SLS (particularly SLS Pool Convener James Lo Chun Kiat) and the supporters.