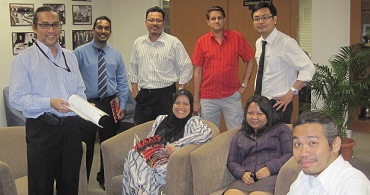 As at 11 Oct 2010, the Publications Committee (“Committee”) has met four times, on 14 May, 2 July, 6 Aug and 8 Oct, and held meetings with various external parties on 6 Aug, 3 Sept, 23 Sept and 8 Oct.  The main project for this term is to revive the production of a print publication as a service to Members of the Bar, in particular to serve Members of the Bar who are less IT-savvy and do not receive/access regular email circulars sent out by Bar Council.

Previously, printed copies of each issue of Praxis and Insaf were sent out to Members of the Bar but with rising costs, the number of issues decreased and the format of publication changed.  For the whole of last term, only one issue of Praxis was published, and only in soft copy.

During the second meeting this term, the Committee contributed ideas and suggestions to produce a lifestyle magazine, one that is more relevant to younger Members of the Bar, in addition to a newsletter that contains purely information for Members of the Bar (compilation of circulars, web reports, book recommendations, obituaries, Disciplinary Orders, library updates and other information disseminated by Bar Council).  The proposal and budget for these publications were tabled at the Finance Committee meeting in July 2010. As Praxis is already an established publication, the Finance Committee advised the Committee to retain the current format of Praxis and hype it up to appeal to younger Members of the Bar, while retaining the publication’s level of professionalism.  It was subsequently suggested that the Committee re-consider the LexisNexis proposal, which had been submitted to the Bar Council in 2009, to determine if the proposal can be made financially viable.

After in-depth discussion with LexisNexis, a proposal was developed to enable the Bar Council and LexisNexis to collaboratively produce and distribute print copies of Praxis for Members of the Bar.  The finalised proposal, approved by the Finance Committee and Bar Council in September 2010, provides that Bar Council will bear the cost of distribution, while LexisNexis will bear all printing costs, and will share advertising revenue that is garnered.

Work has already commenced on the first co-produced issue of Praxis, which the Committee aims to publish in January 2011.  Watch out for it!