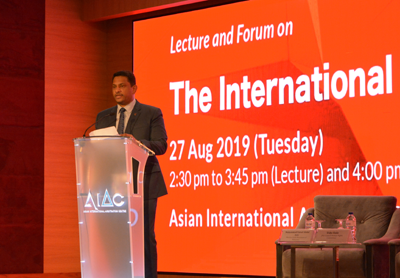 This event also featured the relaunch of the Malaysian Chapter of the Coalition for the ICC ("CICC").
Yang Amat Arif Dato' Seri Utama Tengku Maimun bt Tuan Mat, Chief Justice of the Federal Court of Malaysia, graced the event as the guest of honour.  Judges of the Federal Court, Court of Appeal and High Court; Judicial Commissioners; members of the diplomatic corps; representatives from government agencies and civil society; Members of the Bar; and members of the public were also in attendance.
Abdul Fareed Abdul Gafoor, President of the Malaysian Bar kick–started the event.  In his welcoming address, the President thanked His Lordship Judge Chung for taking time from His Lordship's busy schedule to deliver a lecture on the workings of the ICC, for the benefit of the Malaysian public.
Next, Roger Chan Weng Keng, Chairperson of HRC and Vice–President of the Malaysian Bar, delivered his opening address.  The Vice–President also thanked His Lordship Judge Chung for his participation in the event.
His Lordship Judge Chung, the keynote speaker delivered a comprehensive lecture on the recent developments at the ICC.  The topics that His Lordship addressed in his lecture included:
(1)  An overview of the ICC judicial process;
(2)  The importance of the pre–trial stage;
(3)  Evidence issues relating to the trial stage;
(4)  Introduction of important recent cases;
(5)  ICC reference to the European Convention on Human Rights; and
(6)  Improving efficiency of procedural and practical aspects of the process.
The lecture was very insightful and provided the attendees with an understanding of the background, objectives and procedures of the ICC.  His Lordship mentioned that only the most heinous cases of crimes against humanity, genocide, war crimes and crimes of aggression could be brought before the ICC.
Upon the conclusion of the lecture, HRC members made a short intervention to address the importance of Malaysia joining the ICC, and encouraged all like–minded non–governmental organisations and civil society organisations to join the CICC.
The intervention was followed by a lively public forum on the ICC, and the panel comprised the following esteemed speakers:
(1) His Lordship Judge Chung Chang–ho, Judge at the ICC;
(2) N Sivananthan, Counsel of the ICC; Member of the Malaysian Bar;
(3) Muhammad Faisal Abdul Aziz, Secretary–General, Muslim Youth Movement of Malaysia ("ABIM"); and
(4) Firdaus Husni, Chief Human Rights Strategist, Malaysian Centre for Constitutionalism and Human Rights ("MCCHR"). 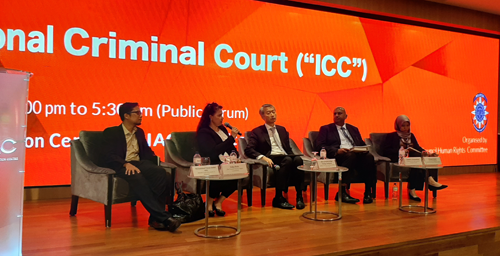 The public forum was moderated by Usha Kula, member of HRC.  During the forum, the panellists shared their views on the importance and benefits of becoming a State Party to the Rome Statute.  They were of the view that wider engagement and dissemination of accurate and adequate information regarding the Rome Statute is crucial, as stakeholders and members of the public need to be well–informed about the importance of this treaty, and how accession would benefit Malaysia.
Many contentious issues pertaining to the ICC and its workings were addressed in great depth by the speakers.
The event concluded with the presentation of souvenirs by Roger Chan Weng Keng to His Lordship Judge Chung, the guest of honour, and the panellists.