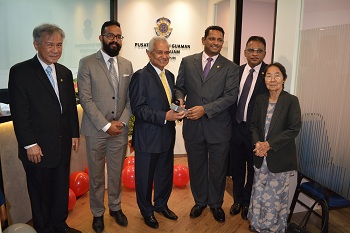 The opening ceremony of the Bar Council Legal Aid Centre (Kuala Lumpur) ("LAC KL")'s new premises at Wisma Badan Peguam, Kuala Lumpur was a moment that will go down in history.  The new office marks the first time that LAC KL will no longer have to operate from rented premises.

On the auspicious day, 14 Oct 2019, there was a festive atmosphere as lion dancers, along with dhol players, ushered the Attorney General of Malaysia ("AG"), Tan Sri Tommy Thomas along with other esteemed guests into the Bar Council's Raja Aziz Addruse Auditorium.  The festivities continued as the performers entered the auditorium along with the golden lions shaking their brightly tasselled manes, while the clash of drums and cymbals drew applause from the audience.  The show was a frenzy of colour, sound and movement.  Lion dances are traditionally performed to bring good luck and fortune.  The accompanying dhol players added an exciting and authentic Indian touch done in true Malaysian fashion, namely a fusion of cultures that make our country truly unique.  Tan Sri Tommy Thomas was presented with a replica of a lion's head made from marble in a ceremonial gesture, followed by a photograph session.

Also present at the opening ceremony were:


In addition, representatives from the United Nations High Commissioner for Refugees ("UNHCR"), Australian High Commission, Royal Thai Embassy, and civil society organisations, as well as volunteer lawyers who have over the years supported and extended their services to LAC KL also graced the event with their presence.
The talented emcees, Morganasundari and Reuel Avinash Pillay kick-started the event with beautifully tailored poems in Bahasa Malaysia.  They called upon the first speaker of the day, Chairman of LAC KL Collin Arvin Andrew to give the welcoming address.  Collin extended his gratitude to all those who supported and extended their services to the Bar Council Legal Aid Centres ("LACs") throughout Malaysia since the inception of the first LAC in Malaysia. He lauded the collaborative efforts between civil society organisations, which have ensured that all Malaysians as well as foreigners have access to legal advice. The emcees then called on the President of the Malaysian Bar to deliver his opening address.  Abdul Fareed Abdul Gafoor acknowledged that LAC KL's relocation to its new premises in Wisma Badan Peguam was indeed a historic moment.  He went on to recall the humble beginnings of the first LAC in Malaysia, which operated out of a community library and coffee shop in his home state, Penang.  He himself had had the pleasure of serving at its first office -- a dilapidated wooden shack by the main road.

Abdul Fareed then highlighted section 42(1)(h) of the Legal Profession Act 1976, which provides that one purpose of the Malaysian Bar is "to make provision for or assist in the promotion of a scheme whereby impecunious persons may be represented by advocates and solicitors".  This served as a timely reminder that legal representation should be made available to all members of society irrespective of class or creed, and that a progressive country is one whereby all of its people have access to justice, be they rich or poor.  He further stated, "The rule of law is meaningless if there is no access to justice -- which is fundamental and a necessity in any democratic society."

Abdul Fareed pointed out important milestones such as the birth of LAC KL in 1983, the formation of the National Legal Aid Foundation (Yayasan Bantuan Guaman Kebangsaan, "YBGK") in 2011, and the collaborations with the UNHCR as well as the Royal Thai Embassy in providing legal advice to refugees and Thai nationals, respectively, who needed guidance and assistance.  These efforts, among many others, truly epitomise the Bar Council's views that access to justice is a fundamental right of every individual regardless of rank, status or office, and that every person is subject to the same laws and the same legal and judicial processes.

Abdul Fareed also brought attention to the Bar Council's work on eradicating the menace of touting; and how the Bar Council has lobbied for the establishment of a comprehensive legal aid scheme for many years, and is calling on the Government to come up with a single provider to meet this need.

Following that, a short video presentation on the LAC KL's new premises was played. 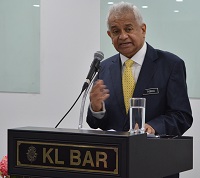 Last but not least, the emcees called upon the AG, Tan Sri Tommy Thomas, to deliver the closing speech.  The AG thanked the Bar Council and the Kuala Lumpur Bar Committee for inviting him to launch the opening of LAC KL, which he regarded as an honour and a privilege.  In his speech, the AG said, "Legal rights are meaningless unless one can enforce them in court.  To be effective in court it is essential that a litigant is represented by a trained professional -- that is, a lawyer".

What happens when the poor and marginalised cannot afford to pay a lawyer?  The AG had this to say on the matter: "Unrepresented litigants are a blot on any modern legal landscape or system.  It is wholly unacceptable."

The AG made reference to volunteer lawyers in the United Kingdom who, at the turn of the 19th century, would render their advisory services to poor litigants in court without charging them a professional fee.  This act of service was referred to by the AG as the "genesis of legal aid in the common law world".  He went on to state that the modern system of legal aid in the common law jurisdiction began when the Legal Aid and Advice Scheme in the United Kingdom was enacted in 1949.  This scheme was not a nationalised service, but was left to professionals of the private sector -- the solicitors and barristers -- to administer.

At the Malaysian Bar's Annual General Meeting in 1982, a resolution was passed whereby all Members of the Bar were called upon to each make a RM100 compulsory contribution towards the establishment, management and running of LACs.  The AG rightly stated that this had largely gone unnoticed by members of the media, the public and the Government as a whole.  As the AG jokingly pointed out, perhaps the Members of the Malaysian Bar should boast about it a little more, since they have been making the contributions for more than 35 years.  Perhaps the time has come for the amount to be doubled, as suggested by the AG, taking into consideration inflation and the purchasing power of the ringgit three-and-a-half decades later.

The AG also paid tribute to Members of the Bar, including senior practitioners who willingly accept briefs from LACs without charge, or at a substantial discount; and the role pupils in chambers play in assisting LACs around Malaysia.  He thanked them on behalf of the Government.

The AG shared that in 2012, legal aid was taken to a higher level as a result of an agreement between the Bar Council and the Government, with the formation of YBGK.  Each year, a sum (that varies) of approximately RM5 million is paid by the Government to YBGK, which in turn funds lawyers who offer their services to legal aid.  The AG went on to state that this is an excellent example of collaboration and cooperation between the public and private sectors for the good of the people, and must be encouraged and built upon.

The AG called on the Bar Council to provide a draft of a Legal Aid Bill to be tabled in Parliament.  Taking into account what has been happening in the 21st century, he is confident that there would be unanimous support from the Parliament, and the passing of the Act would solidify the commitment by the Government "to pay from tax payers annually".

The AG concluded his speech by stressing that "access to justice is real and meaningful".

Following a short dhol performance, members of the audience were cordially invited to adjourn to the 3rd floor of Wisma Badan Peguam, where the AG cut the ceremonial ribbon to officially launch LAC KL's new premises, and signed the plaque to commemorate the occasion. 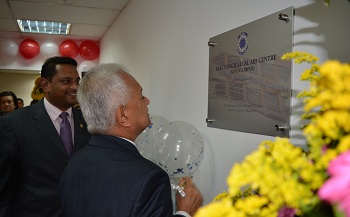 Lunch was subsequently served, bringing an end to a celebratory event that will be remembered for years to come.  Nicole Jo Pereira is a pupil in chambers at Messrs Shahrizat Rashid & Lee.  She says: "Being a pupil in chambers myself, I have found my time volunteering at LAC KL truly enriching, and have come to the realisation that a Legal Aid Centre is akin to a lighthouse.  Those who come knocking are like ships at sea, when the storm comes, one lonely light shines out like a beacon of hope."
© Copyright Reserved 2019. Bar Council Malaysia.