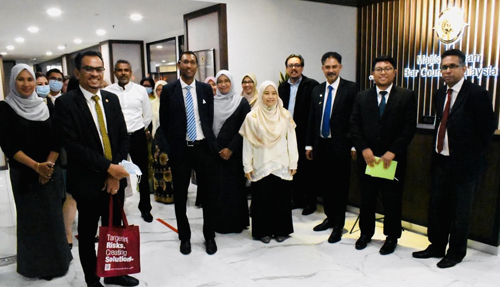 A meeting took place on 17 Sept 2020 between representatives from the Persatuan Peguam Syarie Malaysia (“PGSM”), the Office Bearers of the Malaysian Bar and Officers from the Bar Council Secretariat.

PGSM informed the Office Bearers that they have been tasked to bring into effect the recently enacted Syarie Profession (Federal Territories) Act 2019 (“Syarie Profession FT Act 2019”), which has been modelled after the Legal Profession Act 1976 (“LPA”).

The objective of the meeting was for PGSM to seek the views of the Bar Council on various aspects of its functions and operations.

Among the matters discussed were as follows:

The meeting also touched upon matters such as pupillage requirements, the setting up and regulation of law firms, signage requirements, efforts to reduce touting, and proposed amendments to the LPA.

The President of the Malaysian Bar remarked that the Syarie Profession FT Act 2019 is a suitable model for other states.

The meeting ended with an exchange of commemorative tokens, and both parties expressed their intent to work together in moving forward.