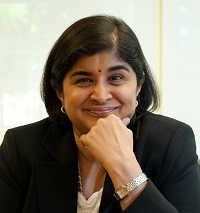 The recipient of the Malaysian Bar Lifetime Achievement Award for 2021 is Ambiga Sreenevasan.

I am greatly honoured to deliver the citation for the conferment of the award upon Ambiga who is, without a doubt, one of our leading and most prominent advocates.

Ambiga was born on 13 Nov 1956 in Seremban, the second of three children, to the late Datuk Dr Gopal Ayer Sreenevasan and Datin Visalakshi Subramaniam.  Datuk Dr Sreenevasan was a pioneering Malaysian surgeon — a powerful force in the development of medical services in Malaysia — and regarded by many as the “father of urology” in Malaysia.  Her mother, Datin Visalakshi had a degree in Sanskrit from the Benares University and a BA (Economics) degree from the Presidency College, Chennai, both in India.

Ambiga’s leadership qualities were apparent from early on in her life.  She was the Head Girl of the well-known Convent Bukit Nanas, Kuala Lumpur.  After her High School Certificate exam, Ambiga read law at Exeter University in the United Kingdom.  She was called to the Bar of England & Wales in 1980, having been admitted as a barrister of the Honourable Society of Gray’s Inn.  She was a pupil at Skrine and was admitted as an advocate and solicitor of the High Court of Malaya in 1982.  She then remained at Skrine as a legal assistant and was a partner at Skrine from 1991 to 2001.  Ambiga was thereafter a partner at Tommy Thomas until 2002 before founding her own firm, Sreenevasan, in 2002.

The great challenge in delivering a citation for Ambiga is that the extent of her achievements and accomplishments makes the task of documenting and delivering the same in one speech near impossible.  Ambiga’s modesty and humility are such that you will never hear of her achievements, from her.  So please allow me the honour and privilege of sharing about the heights to which she has reached.

Rule of Law and Human Rights

To Ambiga, the law was not merely a means of earning a living.  She set out on a journey of defending basic human dignity, human rights, and the rule of law.

She was a founding member of the Women’s Aid Organisation, a non-governmental organisation set up in 1982 to provide shelter and counselling to women and children who are victims of violence, and she later sat as one of its Executive Committee members.

She became a member of the Bar Council in 2002 and was one of its most well-known and respected Presidents, having been elected as such in 2007 and serving a two-year term as President.  She fearlessly led the Malaysian Bar in the “Walk for Justice” in 2007 to protest political interference in the Malaysian Judiciary.  Following that, a Royal Commission of Inquiry was set up to investigate the allegations.  This famous Walk culminated in major reform of the Judiciary and led to the formation of the Judicial Appointments Commission.  For those of us who were at the Walk, it is an event etched in our memories, forever.  It was no ordinary event: the atmosphere was charged, and the need for reform was at the forefront of those who marched undeterred by the rain.

In 2008, Ambiga pushed for and obtained vindication for the judges who were unfairly sanctioned in the Judicial Crisis of 1988.  This awareness and push brought about a certain level of transparency and accountability in the appointment and promotion of judges, and to a reset of the relationship between the Bench and the Bar.(1)

Again, in her quest for true democracy, Ambiga chaired BERSIH 2.0, a coalition for clean and fair elections, from 2010 to 2013.  She led and was at the forefront of some of the largest rallies held in Malaysia calling for electoral reform, making her a household name.  After her term as Chairperson of BERSIH 2.0, she was appointed a patron of Global BERSIH.

From 2014 to 2018, Ambiga served as the President of the National Human Rights Society (“HAKAM”).  She spoke at innumerable conferences and seminars, including the Oslo Freedom Forum in Norway in 2013 — a global recognition of her struggle for justice, rule of law, and democracy.

Her work has culminated in greater accountability, more democratic space, and I am sure facilitated and culminated in the historic change of government, in 2018, albeit a short-lived change.  Ambiga was appointed a member of the Institutional Reforms Committee (“IRC”) in 2018, a committee set up by the Government to propose key reforms in institutions such as the Royal Malaysia Police (“PDRM”), Judiciary, Parliament, and the Election Commission.

Also in 2018, Ambiga was appointed a Commissioner of the International Commission of Jurists (“ICJ”), and in 2021, she was elected as an alternate member of the ICJ’s Executive Committee.

For her incalculable and invaluable contributions to the cause of human rights and the development of the rule of law, Ambiga has received numerous awards, including the following:

Her best-loved attributes are undoubtedly her steadfast courage, her integrity and honesty, her strong principled stand on human rights and the rule of law, and the intelligent way she deals with the challenges facing the country.  Her calm and collected demeanour and the respectful regard with which she deals with people, disarm her adversaries.


Ambiga has a keen interest in the performing arts and music.  She was a founding member of the “Reluctant Performers”, a wonderfully talented home-grown group of lawyers who would regularly perform at Bar functions with skits, music and songs which raised, in a wholly entertaining and humorous manner, the current issues of Malaysians and Malaysian politics.

“There may be times when we are powerless to prevent injustice, but there must never be a time when we fail to protest” — Elie Wiesel

She took on every challenge, head-on; she never flinched; she never gave up; she never failed to protest.  She is a true leader, a tribute to our profession, and we are proud of her.