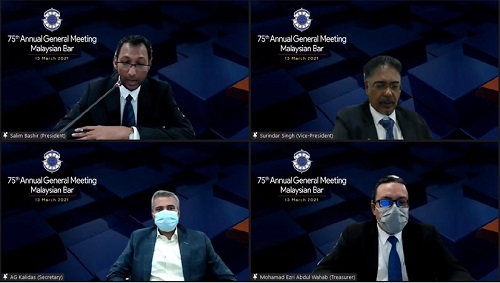 A brief summary of the AGM follows below.

(2) Nine motions had been proposed for consideration at the AGM.

(3) Eight resolutions (available here) were ultimately adopted by Members of the Bar, as follows:

(a) Resolution Regarding the Continuing Professional Development Scheme;

(b) Resolution Regarding the Emergency (Essential Powers) Ordinance 2021;

(c) Resolution on Minimum Remuneration for Pupils and Improving the Quality of Pupils;

(d) Resolution to Clarify on the Policy to Implement Minimum Remuneration for Pupils in Chambers;

(e) Resolution to Support the Call to Abolish the Practice of Child Marriages in Malaysia;

(g) Resolution on Condemning Repatriation in Violation of Court Order, and Enactment of Refugee/Asylum Seeker Law; and

A total of 1,268 Members registered their attendance at the AGM, which concluded at 4:58 pm.

In the first Bar Council meeting held immediately after the AGM, the following Office Bearers of the Malaysian Bar were elected for the 2021/2022 term:

Murshidah bt Mustafa (elected to the Bar Council by postal ballot) was appointed as Treasurer.

The remaining 34 members of the Bar Council are:

Chairmen of State Bar Committees, and State Bar Representatives on the Bar Council