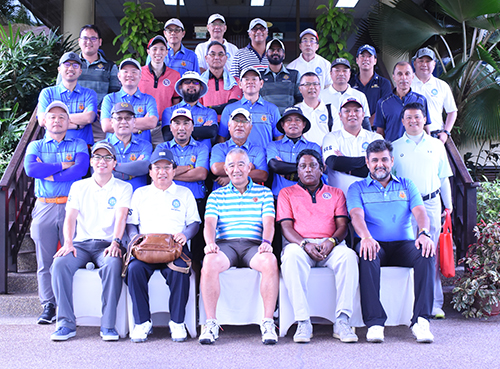 Golf was held at Nexus Golf Resort Karambunai, Kota Kinabalu — a leisurely 40 minutes’ drive from the city to a resort golf course nestled within million years of rainforest with typical Bornean jungle on one side and the endless South China Sea on the other side. The event was graced by YAA Tan Sri Datuk Seri Panglima David Wong Dak Wah, Chief Judge of Sabah and Sarawak as a guest player.  The host Sabah Law Society (“SLS”) was represented by nine players, the Advocates’ Association of Sarawak (“AAS”) by 11 players and our own team the Malaysian Bar (“MB”) by 11 players.

The eight full flight teed-off shot-gun at 8:00 am.  The wet fairways due to daily rain became a formidable factor besides the wind which made the game challenging with lot of balls finding watery graves all along the 18 fair-ways.  Then a freak storm which lasted for about 40 minutes made the play to be suspended.  Since most of the flights have completed about 14 holes, the respective captains of the teams decided to wait for the rain and wind to abate to complete the tournament.  After waiting for an hour the game resumed and all the players managed to complete the 18 holes. Lunch and prize presentation was held at the Club itself.  The final result taking into account the top five scores of players from each team is as follows:

Another victory to MB golf team. My heartfelt thanks to the SLS Organising Committee, the SLS golf convener Yannick Anuar Ghani and all the MB players who made it to the Tripartite Bar Games.