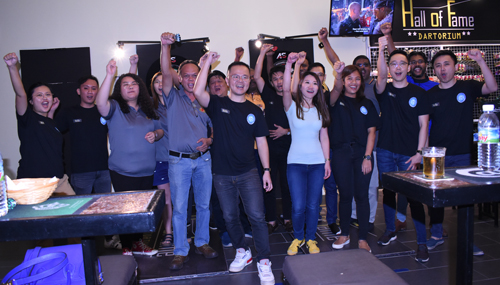 Darts was played on 8 Nov 2019, the second day of the Tripartite Bar Games 2019.  The Malaysian Bar darts team (“MB”) started with a disadvantage, following the execution of the Sabah Law Society team (“SLS”)’s treacherous scheme to get them all to have too good a time during the opening dinner the night before.  The free-flowing food and drinks including the Butod (sago worms) had been hard to resist.

The MB team had a tough time finding the venue on match day.  Hidden in a light industrial area in the outskirts of Kota Kinabalu was the “Hall of Fame” — a Dartorium!  The word only exists in a darter’s dictionary.

The format of play for the day’s competition was as follows:


Each game was a best of three sets except the foursome, which was a single set.  Each game carried a point.  The overall winning team of the match received an additional point.

Having lost to SLS in the last edition of the Tripartite Bar Games in Kuala Lumpur, MB was itching for revenge.  MB however was concerned about the home ground advantage that SLS enjoyed.  Extensive plotting and strategy went into drawing up the line-up which, once written was cast in stone.  There was no room for amendments. The game started with MB’s maverick Thevan Raman taking on SLS’s seasoned Darren Punai, also our gracious host.  MB, being grateful visitors, decided to give SLS a sporting chance by allowing Darren Punai to win the first singles.  Next up was MB’s captain and veteran Paul Krishnaraja against young Jit of SLS.  Paul Krishnaraja showed no mercy by taking the game in straight sets.  Then it was MB’s only female player Amy Chong’s turn.  She showed tenacity by coming from behind to beat SLS’s Christine. 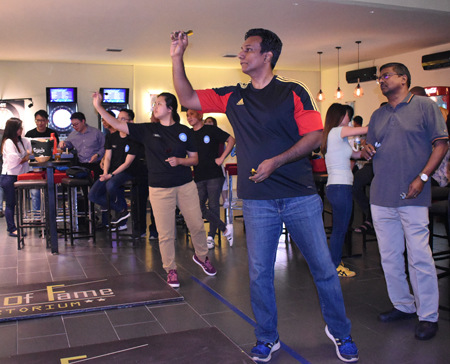 The decider was to be a single set between the best players from each team.  MB’s captain Paul Krishnaraja was called upon to step up but the master darter declined, knowing full well that he should give way to Thevan Raman, who had earlier lost to Francis and was nursing a burning desire to settle the score.  The match was intense with both darters throwing excellent darts.  The psychological battle off the pitch was even more intense, with team members and supporters cheering them on.

As the saying goes, darts is not about how one starts off.  It is all about how one ends it.  Francis, despite having started the game well, could not stop Thevan Raman from a check out and winning the game in style.

MB emerged as the overall winner by taking 10 points.  AAS finished second with 9 points after beating SLS 6–1.  Winning and losing is something that the players may forget with time, but the camaraderie and warmth felt during the Games will certainly not be forgotten!