The Tripartite Bar Games 2019 were hosted by Sabah Law Society (“SLS”) in Kota Kinabalu, Sabah from 7 to 9 Nov 2019.  The cross-country event was scheduled to take place on the morning of 9 Nov 2019 at Universiti Malaysia Sabah (“UMS”) with a distance of 5km around UMS.  As the Games uphold friendship and sportsmanship first and competition next, a group of runners from the Malaysian Bar (“MB”) and a few runners from SLS had jovially gathered on the eve of race day to enjoy fresh seafood. 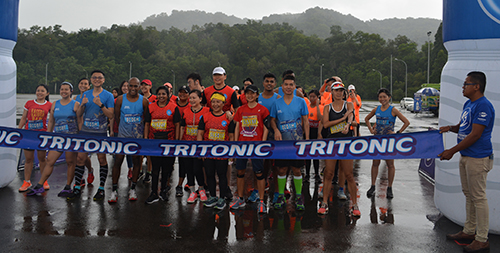 As Sabah is known as “The Land Below the Wind”, rain and wind greeted the runners in the morning.  Runners representing the Advocates’ Association of Sarawak (“AAS”) were donned in bright orange t-shirts whilst the local Sabahans were spotted in unified red tee.  In contrast to the huge turnout of 30 runners from AAS and 40 runners from SLS, MB had only 10 runners just meeting the minimum criteria.  The Malaysian runners, young and old, were unfazed by the rain.

The race flagged off at 7:00 am sharp and the downpour immediately became heavier as the runners splashed their feet away.  The route was scenic and the rain refreshing.  After the mid-way checkpoint at the roundabout, the runners were greeted with a gradual uphill slope before descending all the way down to the finish line. We really enjoyed the Games and the great camaraderie with our fellow members from Sabah and Sarawak.  SLS was a great host and we look forward to the next race in Sarawak!