There were four notable “firsts” for the Malaysian Bar (“MB”) basketball team in the Tripartite Bar Games 2019, namely first time:

(1) having only eight registered players in the team, comprising four players from each sex;
(2) borrowing players from Sabah Law Society (“SLS”);
(3) playing back-to-back competitive games, with only 15 minutes break in between the games; and
(4) featuring non-competitive ladies 3-on-3 basketball.

All the basketball games for the MB team took place on 8 Nov 2019. We got off to a good start when the ladies team led by Yoearn Khor Chai Hoong, took control of the entire game from start to finish, culminating in a comfortable victory against a dogged SLS who had shown moments of brilliance and promising displays during the game.  More significantly, the MB ladies team managed to meet the female players from SLS and the Advocates’ Association of Sarawak (“AAS”), in the hope of recruiting more female players to promote and push for ladies basketball to be a competitive sport in all future bar games. 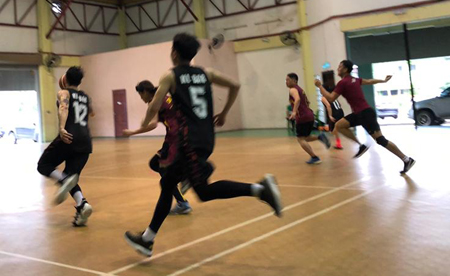 Owing to a lack of players in our team, ASS had graciously agreed to our request to borrow players from SLS, on condition that there shall be at least four MB players and only one player from SLS on the court at all times.  As one of our male players was still injured and unfit for the game, we had to stick to a 3 + 1 + 1 line-up (3 guys + 1 lady + 1 SLS player) throughout the game against AAS.  In some parts of the game, we had to field two female players on the court, just to give the male players some needed rest.

Unperturbed by the lack of players and the aggressive play by AAS, our team stuck to the game plan and played to our strengths when Michael Pang Chee Ren, the team’s rookie sensation, bulldozed AAS’s defence with his signature power drive and long range 3-pointers, leading us to a first victory for the men’s basketball on that day. 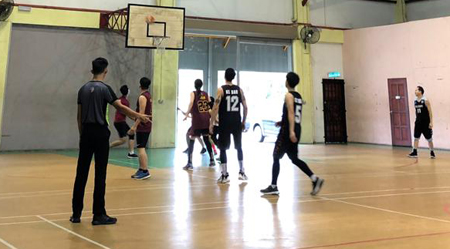 We knew it would be an uphill task to play against the host, especially since we just played a 40-minute game against AAS with our thin squad.  Despite the apparent fatigue in our players, our team took the bull by its horns and soldiered on with the final game after having just rested for 15 minutes.

All our players, both guys and ladies, as well as the “import players” from SLS were giving their best in both ends of the court in this final game.  Against all odds, our team eventually triumphed over SLS with a bigger winning margin than the game against AAS.

Besides Michael Pang Chee Ren who again played like King James and had a monstrous game, our another young rising star, Edwin Eng Zhe Wei, also contributed significantly to the team with his relentless running and accurate shooting.  On the defensive end, we had our veteran player, Kenneth Seet Wan Zheng who had some crucial defensive plays, including few rebounds and stops in the key moments of the game.  Our ladies also played well with Law Min scoring a few baskets, Cheah Yee Ling stopping the opponents and an all-round performance from Goh Ming Qiu.

On behalf of the team, I thank all those fans and members that were present to support us.  We also wish to thank SLS, led by its convener Yong Yit Jee whose warm hospitality must be reciprocated and praised.  To more games to come!