Badminton was played on 9 Nov 2019 at the Likas Sports Complex, Kota Kinabalu, Sabah.

The allure of playing in Kota Kinabalu or East Malaysia for that matter has always attracted warm participation from the Malaysian Bar (“MB”) badminton players as evident from past Tripartite Bar Games.  This time it was no different as 12 players, comprising nine men and three women, formed the MB team.

The format, as discussed and agreed with Sabah Law Society (“SLS”) and the Advocates Association of Sarawak (“AAS”), was a round robin format of five matches between the three teams comprising three men’s doubles, one veteran men’s doubles (age above 45) and one women’s doubles.

Sportsmanship was warmly displayed by all three teams when SLS and AAS could not meet the age requirement of the veteran men’s doubles at the last minute and all teams agreed that the oldest male player can be repeated for the veteran’s game. 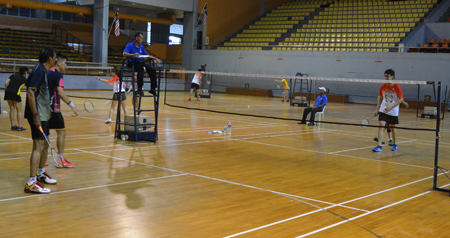 In the veteran men’s doubles, a strong SLS pair with the repeated player being their best player, overcame the MB pair.  Overall 3–2 to MB. Again, the 1st men’s doubles pair led the way by easily defeating the AAS 1st pair.  However, the 2nd pair lost to a strong AAS 2nd pair.  Score at this time was 1–1.  The mood in the MB team was high as everyone was confident that the 3rd men’s doubles, the women’s doubles and the veteran men’s doubles pairings had the ability to win their matches, which they did.  In the end MB won 4–1.

Appreciation
Warm appreciation goes out to the respective conveners from SLS and AAS for wonderful hospitality and top class sportsmanship.  The players enjoyed ourselves thoroughly and we look forward to the next Tripartite Bar Games in two years’ time in Sarawak.